In 2013, an F5 tornado ripped through the City of Moore, Oklahoma, devastating Plaza Towers Elementary School and numerous homes in surrounding areas. The community was quick to band together and begin rebuilding efforts, with new constructions re-establishing the vibrancy of its neighborhoods. From the tragedy emerged the possibility of redesigning and enhancing community amenities, including the addition of a Splashpad to Little River Park.

The City of Moore at times uses local elementary students in their park projects by letting them choose among several proposed ideas. The youth of Moore spoke up and opted for a pirate theme for the new project. In August 2017, with the support of a federal disaster recovery grant and a design from local Vortex experts at Power Play and Vortex Aquatic Structures International, the largest, pirate-themed Splashpad in Oklahoma was inaugurated.

“What a success it has been! We want to thank Vortex and Power Play LLC for their design and installation of the Splashpad.” 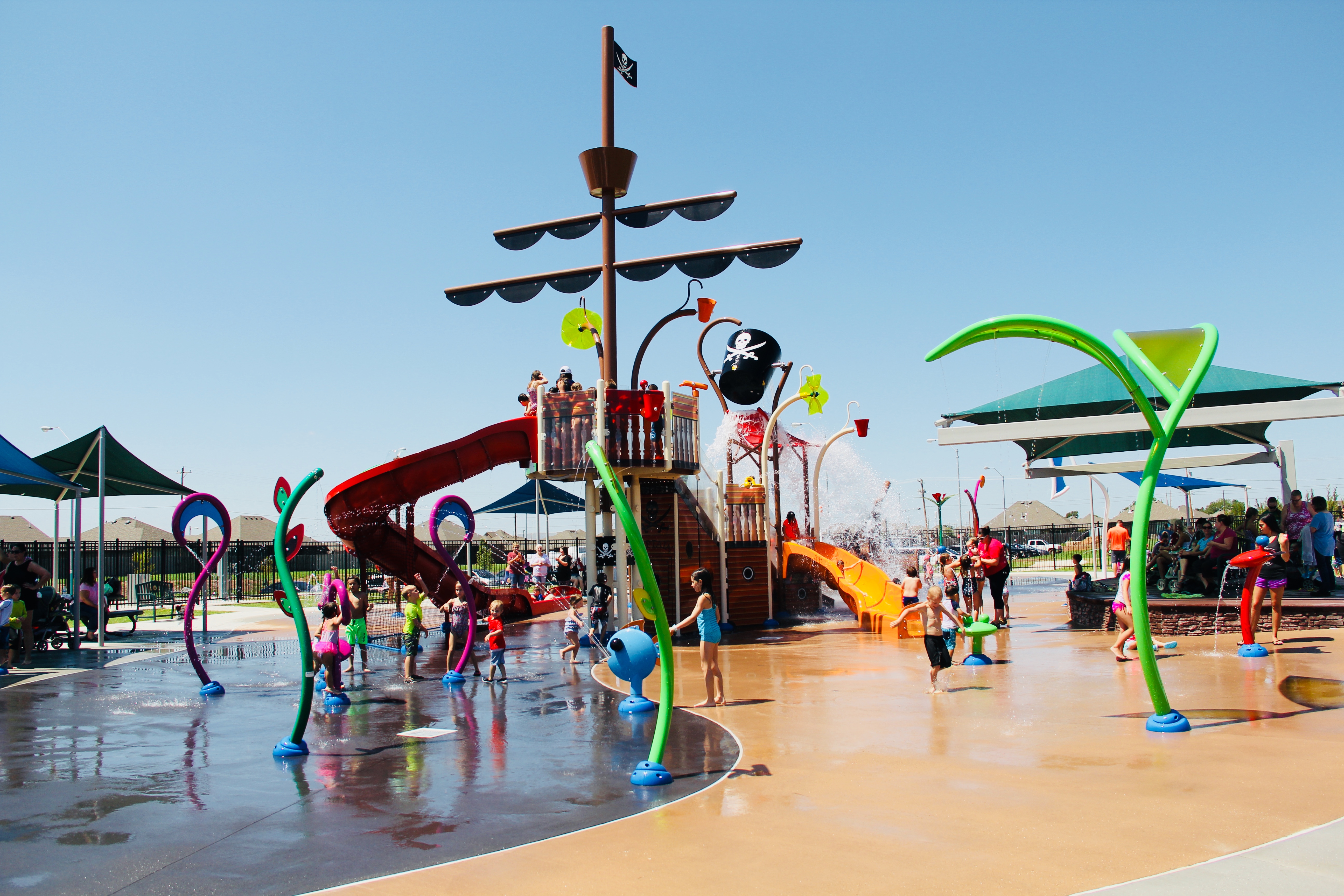 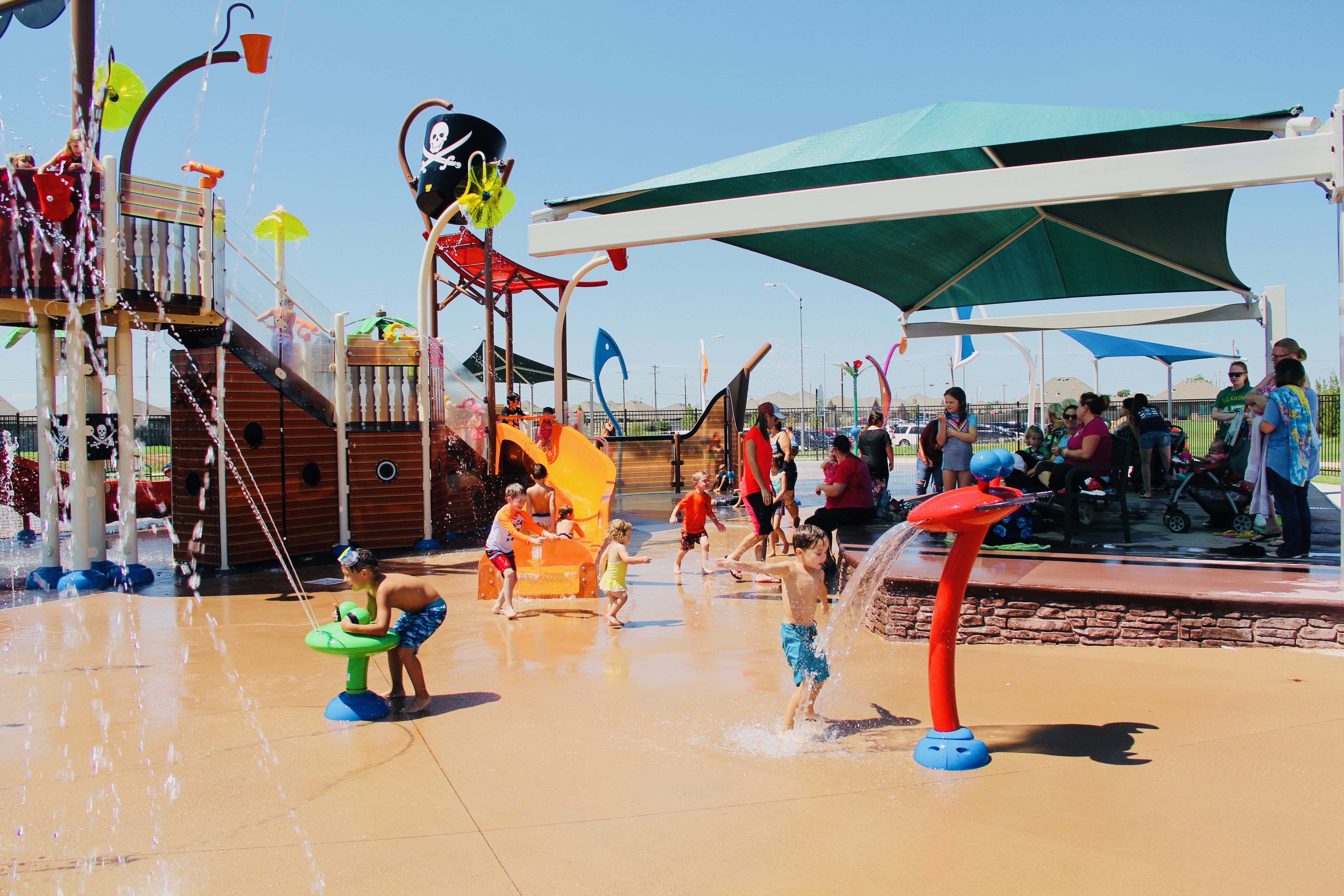 Aquatic Adventure from the Youngest Age

Spanning a total area of 7,500 sq. ft., the Splashpad is composed of three different activity bays that represent shore and sea and offer dynamic play areas adapted to children of various ages and abilities. The three are interconnected and strategically designed to keep children moving from one set to the next, ensuring fun and excitement for all.
Intended for the youngest of users, the Toddler Bay features gentle Jet Streams, raining Leaves, Seaweed and Crab, Fish, Frog, and Octopus elements from the Vortex Ocean Collection. The Family Bay appeals to slightly older children, with its Water Tunnel, Palm Trees, interactive Bloom Flower and more colorful Ocean creatures, including a Shark, Lanternfish, Pelican and Sea Fish. 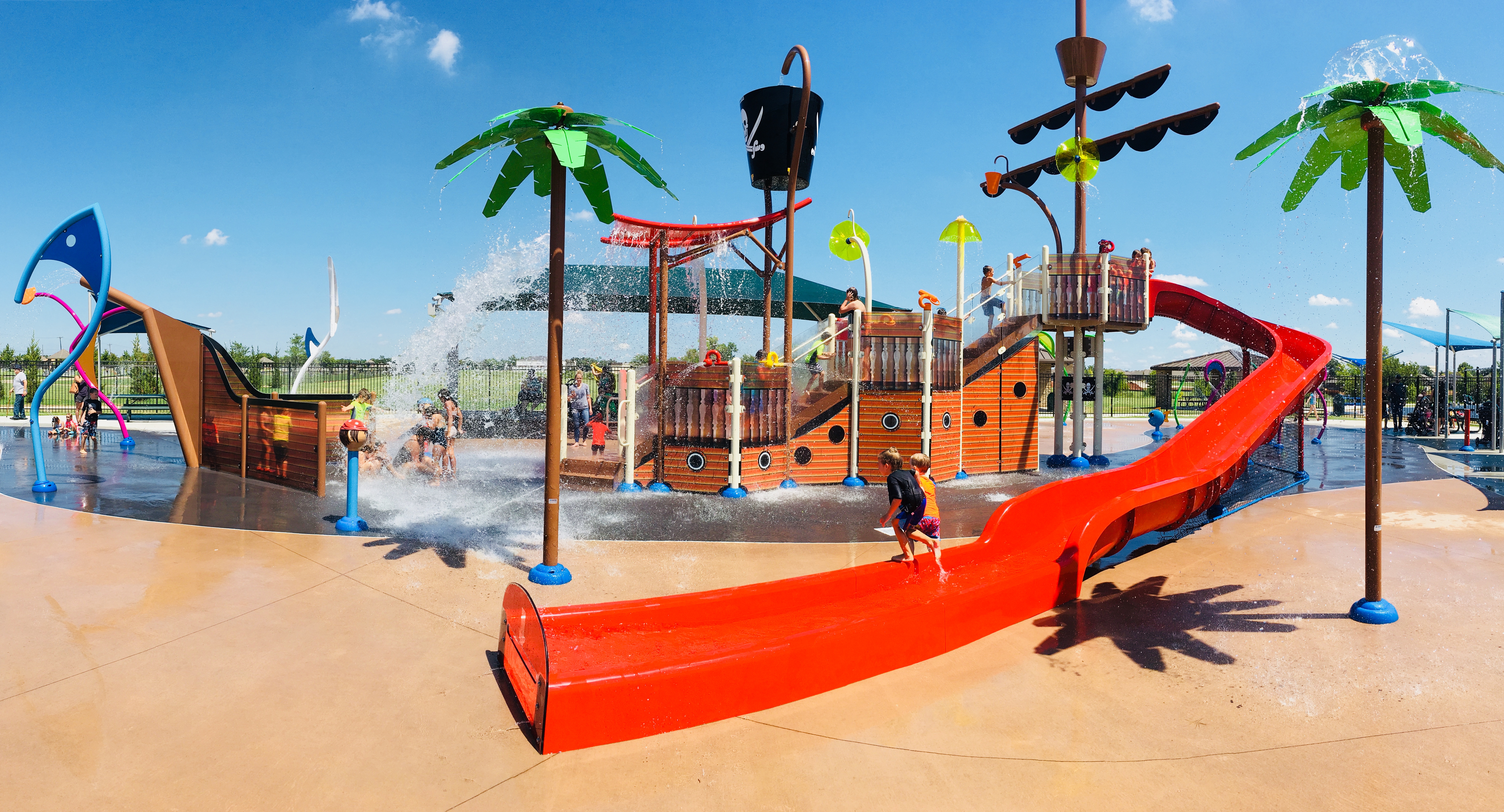 The Action Bay is at the heart of it all, featuring the centerpiece of the Splashpad – a multi-level custom Pirate Ship Elevations™ structure with water cannons. The Pirate Ship comprises four elevated decks, from which flow two waterslides of varying speeds to accommodate buccaneers of all ages. The use of runout slides makes it possible to add safe waterslide fun to zero-depth Splashpad designs.
Overhead looms a large Supersplash bucket bearing the notorious skull and crossbones, one of three dumping buckets ready to douse the children waiting in anticipation below. In all, the Splashpad offers a total of 15 above-ground elements, including water cannons and spinners, as well as 22 ground spray features, providing high play value to toddlers and teenagers alike.
Nearby, a raised observation deck with cantilever shades, benches and an 18” seat wall with directional wall jets creates an area where parents can relax in the shade while keeping an eye on the little ones, that is to say, if they’re not tempted to join the fun themselves! 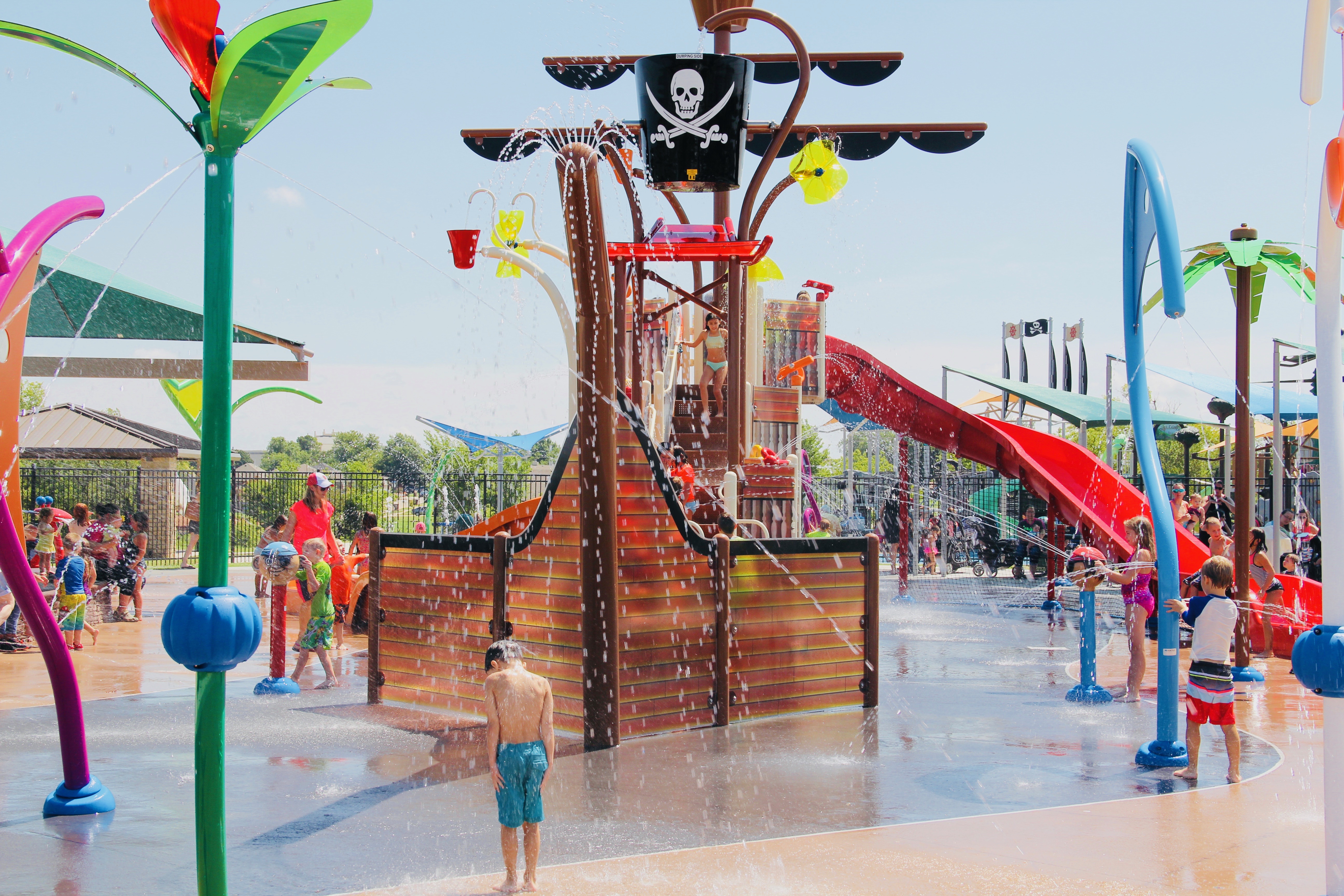 “The community has benefited from this project. It showcases what a community can do when all involved come together to achieve something great!”

Within an hour of its official opening, well over a hundred children and family members had already started exploring and enjoying the Splashpad. City authorities and project managers were delighted with the response, as Moore children rediscovered one of their main neighborhood destinations. Its popularity has not waned since, remaining a hotspot on scorching Oklahoma summer days.
Smiling children at play on the Splashpad are the best testimonial to the power of play in recovering from hard times and re-affirming Moore as a great place to live for families. 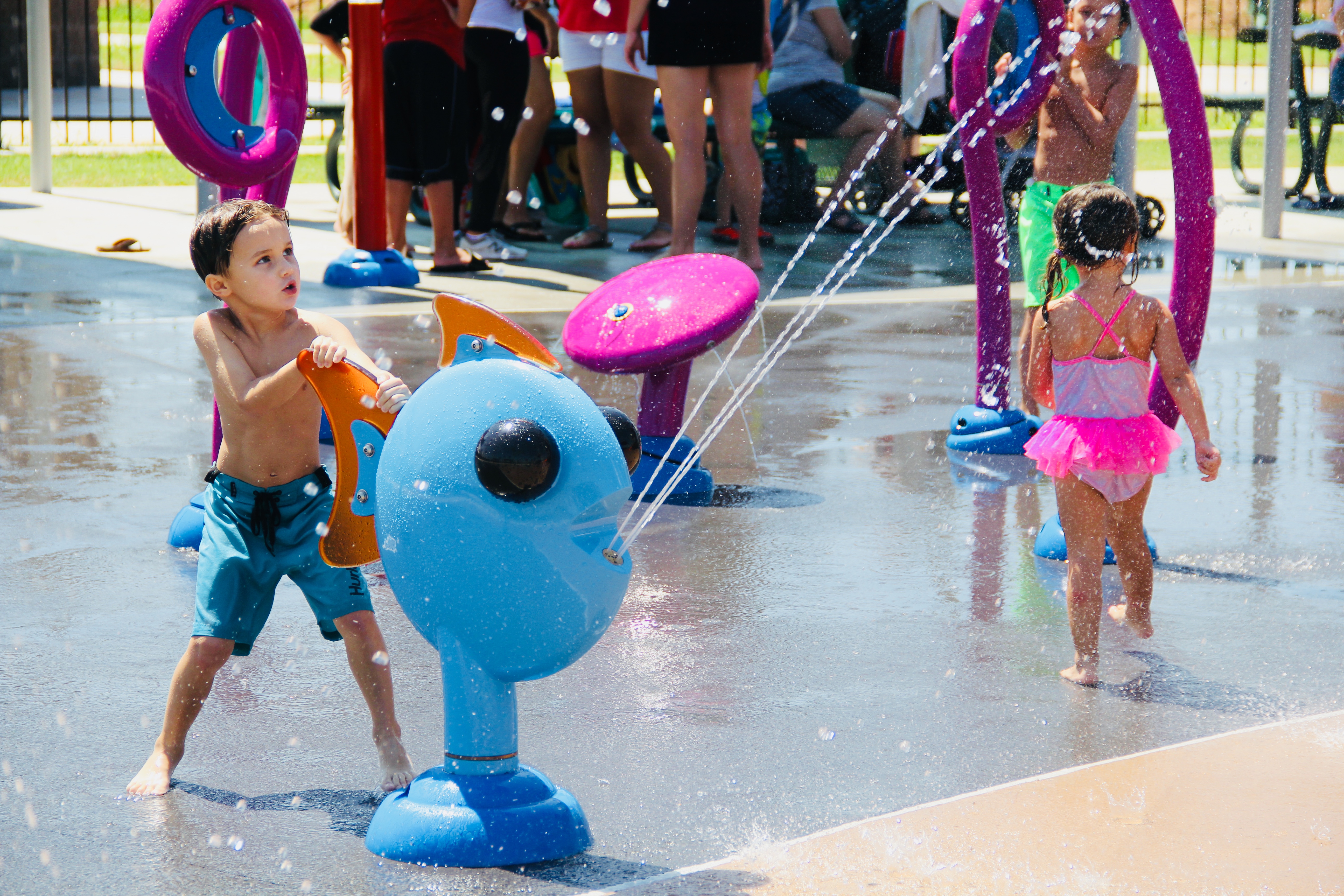 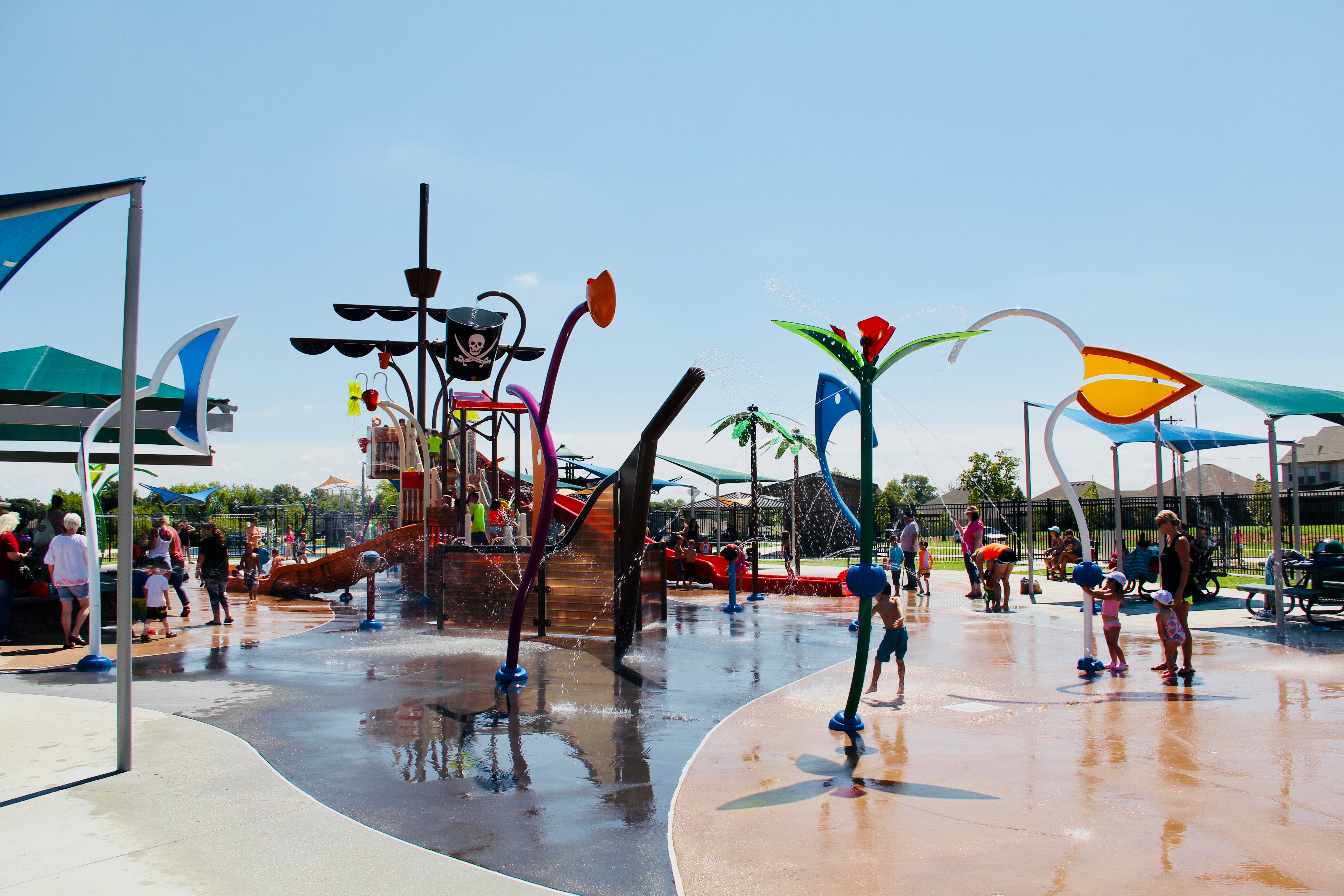 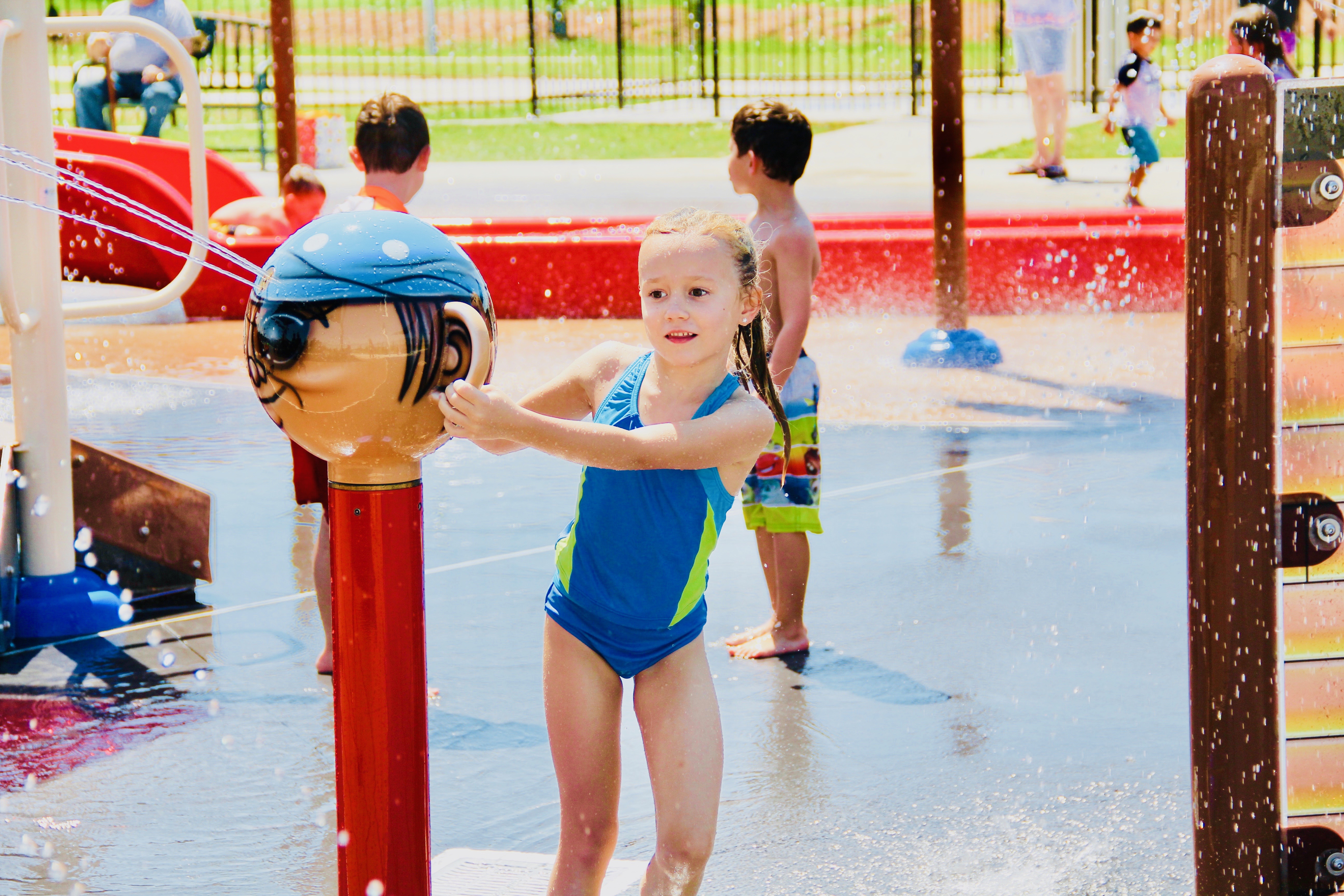 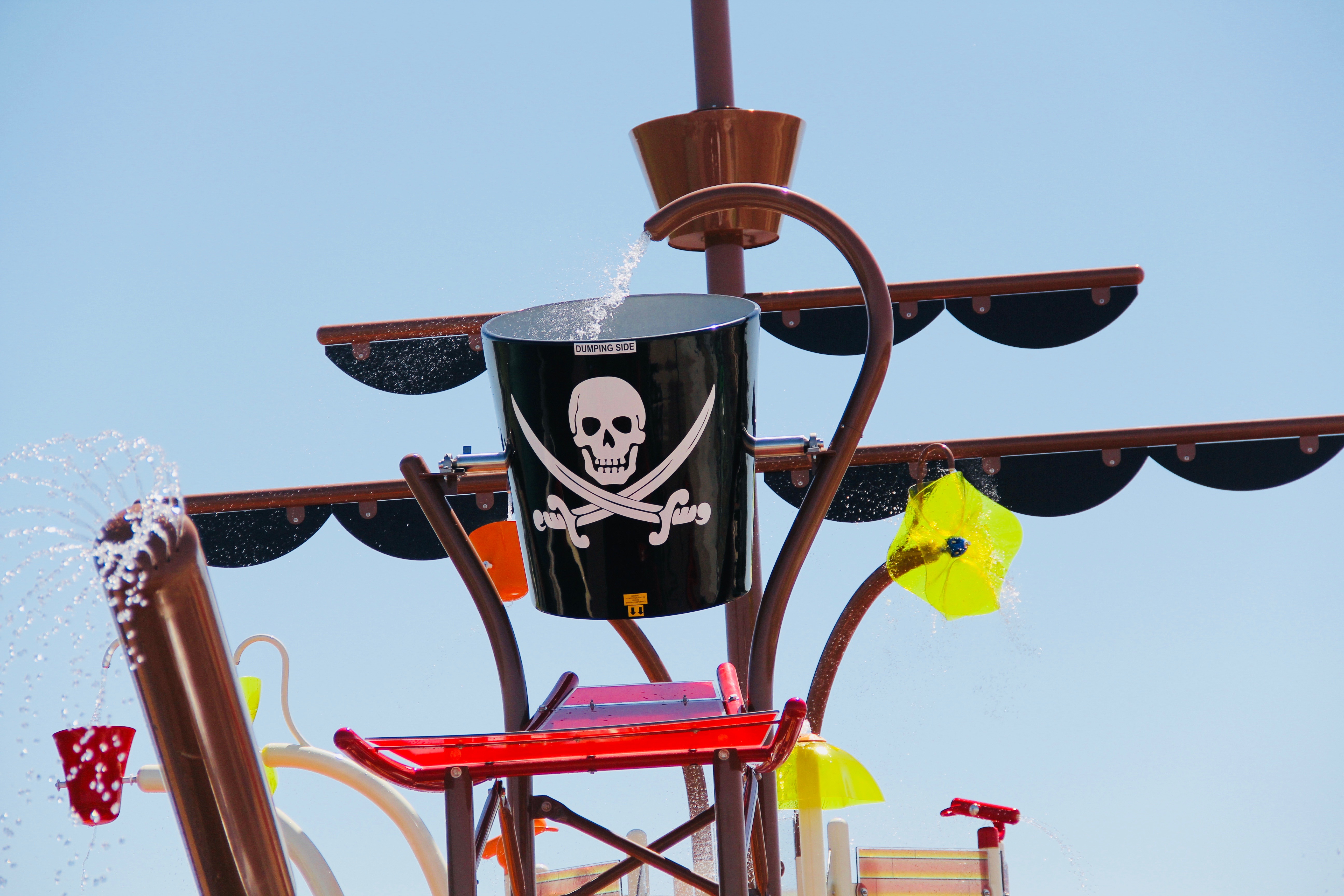